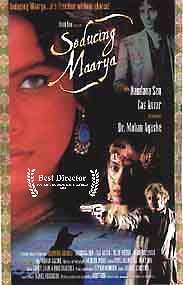 "Seducing Maarya overflows with exotic heat..."
"Seducing Maarya is a Canadian film, and it comes with a boiling emotion that you don't often seen in homegrown cinema. Boy, does it boil. It practically overflows with an exotic heat...
Director-writer Hoe sometimes fills the screen with scenes of transcendent beauty... Seducing Maarya has a visceral power that stays with you after it's over. There is something about her you cannot easily dismiss, a texture that Hoe has inserted into the material that gives it a power beyond its humble style and disharmonic reactions. Seducing Maarya is a film that sets out to be provocative and somehow, despite itself, succeeds."
Jay Stone, Ottawa Citizen

"...An engaging feature with intriguing characters... the taboos are handled tastefully... the actors make us believe each fulfils a need of the other."
Marke Andrews, National Post & Vancouver Sun


"...Applause for the way it handles the complex storyline that manages to be dramatic, comedic and sensual, told with a visual flair despite its minuscule budget..."
Stephen Cooke, Halifax Herald

"...Not since Like Water for Chocolate has food played such a key role in seduction..."
T.S.Warren, Ottawa X Press

"...one of the most interesting and surprising features [at the festival]."
Tempo News, Taos, New Mexico

"I enjoyed SEDUCING MAARYA very much- shattering preconceptions about the family, the libido as being the arbiter of action, the quagmire of allegiance to things such as homeland, religion, family, all being echoes, or microcosms of the others... the innuendoes of cuisine..."
Steve Seid, Pacific Film Archive

"...a blend of humour and tragedy that breaks thru' the cultural, religious, sexual taboos that bind us..."
Wendy Wellington, Ashiana, Toronto

"...Hunt Hoe's film is for a sophisticated audience..."
Pratik Joshi, The Tribune, India

"An emotional epic with stellar performances of great complexity and range... Hoe treats the collision between old world values and new world sensibilities with equal measure of tragedy and comedy. Full of warmth, grace, passion and great cinematic beauty, this is an timely film which is ultimately a story about hope..."
Ken Anderlini, Vancouver International Film Festival

"...A meditation of passion and seduction that will completely take you over, spin you around and have you rethinking the norms of falling in love."
Independent Movie Reviewer, U.S. Citizen

"Framing powerful performances with wonderfully expressive cinematography, Seducing Maarya delves into the dangerous secrets and desires which can suck a family into chaos..."
The New Festival, New York

"Seducing Maarya is the kind of low-budget but fascinating film that could build a cult following... It veers wildly between melodrama, social documentary and farce. An ethnic movie informed by a gay sensibility, taking forbidden love as its theme and explores it from just about every angle... I laughed until I cried."
Pat Donnelly, The Gazette, Montréal

"...One of the most provocative films, which showcases Nandana Sen in her first fleshed-out role and a profound performance by Dr.Mohan Agashe..."
Janet Fine, Indian Express

"...This is a film about crossing boundaries- personal, cultural & sexual- which in the hands of Hunt Hoe, we are assured of unusual turns and twists and dramatic visual images in the narration of this new-style morality tale."
Gautam Hooja, Hindustan Times

"...among the film's many strengths are its vibrant soundtrack, a compelling story, strong performances, and a mood/ sensibility that is refreshingly different..."
Jeff Miller, Utica College, USA